This is a 1-day tour of Udaipur sightseeing tour of forts and palaces lake and city in Udaipur. This tour is ideal for the tourist who wants to explore the maximum cities of Rajasthan in a short span of time. The tourist can enjoy the Lakes Adventure in Mount Abu. Services of qualified provided at Udaipur.

1.City Palace: The grand City Palace, towering over the Pichola Lake, is one of the largest palace complexes in Rajasthan. The splendid palace, originally built by Maharana Uday Singh II, rises 30 meters above Lake Pichola and extends up to 244 meters.

2.Jagdish Temple: Jagdish Temple is a large Hindu temple in the middle of Udaipur in Rajasthan. A big tourist attraction, the temple was originally called the temple of Jagannath Rai but is now called Jagdish-Ji. Located 150m north of the palace in Indo-Aryan architectural style, the temple is dedicated to Lord Vishnu.

4.Fateh Sagar Lake: An artificial lake constructed by Maharana in the north of Lake Pichola in 1678 and to the north-west of Udaipur. Within the confines of the Fateh Sagar Lake, there are three small islands.; the largest of these is called the Nehru Park

5.Monsoon Palace (Sajjan Garh): This palace is unique for the purpose for which it was constructed. The palace was built by Sajjan Singh to keep a watch over the monsoon clouds in the surrounding region. 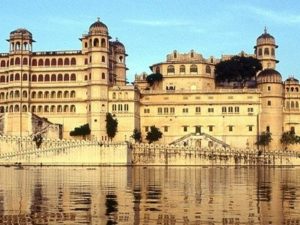 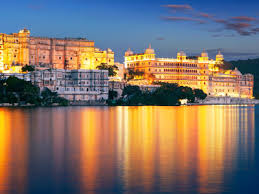